As I explained in my previous post, the build engine in TFS 2010 is now based on Workflow Foundation 4.0. I’ve decided to start a series on the new features of TeamBuild 2010 and will start by the creation of a new build.

The information screen hasn’t change and still ask for the build name and it’s description:

As specified in the small description, the “Gated check-in” can rejects all modifications to the code in the source control which could break the build. My next post will be on “Gated Check-in” and “Private builds” so I won’t explain further this option.

When the build trigger is specified you need to specified the workspace which will be used (nothing new here):

The next screen is new and is use to select and configure the workflow which will be use. The top section is for selecting the workflow template:

When creating a new TeamProject 3 templates are created:

This is where Workflow Foundation is really good, we can define a generic and configurable template which we will reuse for multiple builds. Each build custom configuration will be in his definition. The list of parameters is not static and is based on the workflow description, also the value specified in the definition are only default values and can be overridden when queuing a build manually.

The last screen is where you specify the retention policies depending on the build status and type:

Triggered and manual builds are standard build types, private builds are builds started by a developer and using the merge of the latest version and a shelveset. This enables a developer to test his code using a standard environment (the build server) before actually checking in his modification. A new option is also available for each build type and status, specifying what should be deleted when a build is deleted: 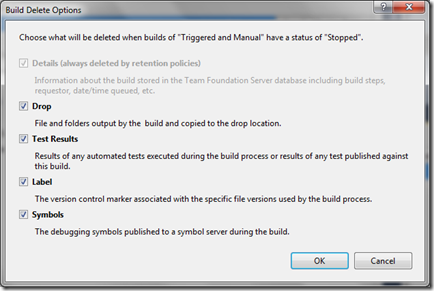 It is now possible to precisely specify what will and what won’t be deleted when a build is deleted (either manually or automatically due to retention policies).

Next time I’ll talk about “Gated check-in” and “Private builds”.