What is a “Gated Check-in”? It’s a new type of build which is launched automatically every time a developer makes a check-in. But unlike continuous integration, a “Gated Check-in” will reject the check-in if the build is on error.

Technically, the “Gated Check-in” uses shelvesets. When a developer makes a check-i, Visual Studio will prompt him with a new dialog asking to shelve it’s modifications: 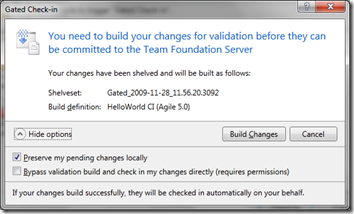 As you can see, the developer can also bypass this mechanism and force a check-in if he has the appropriate rights. If he goes for the “Gated Check-in” a build will be launch and the following steps will happen:

If there was an error, the developer will be able to unshelve it’s code using the build explorer so that he can correct it:

You can also manually queue a “Gated Check-in” build. In this case the dialog window has new options:

Being able to specify manually the shelveset brings us to the second new build type: the “Private Build”. A “Private Build” is a build launch only manually with a shelveset specified. This build will execute as a “Gate Check-in” with the following restrictions:

The “Private Build” can be used on any build types (manual, continuous integration, …) and can help developer validates their changes using the same process on the same machine the build will use. This helps for example prevent a build error when the developer has added a third party component on his local machine but not on the build server.

To conclude, “Gated Check-in” are a great addition and can insure that no broking code is checked in but can be a little to intrusive for me. Private builds, on the opposite, are my preferred choice as they let the developer with the freedom to check their code in a reliable manner.