Since TeamBuild is now based on Workflow Foundation 4.0 Microsoft has provided some activities specifically for TeamBuild. Those activities are like the Task in TeamBuild 2008 : 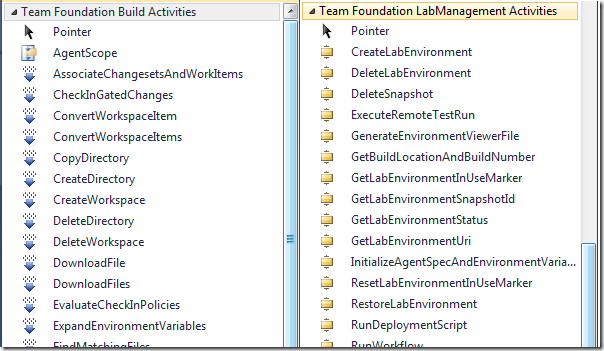 As you can see from the previous screenshot there are two main categories: one for build activites and one for LabManagement activities. In this post i’ll only talk on the first one.

The first activities to know are the one defining sequences:

As i explain in the first post of this series the build process is now executed on a build controler and on a build agent. The AgentScope sequence is here to indicates to the build engine that all it’s activities are to be run on the build agent. The InvokeForReason sequence can be use to specify a set of activities to run depending on the current build type. To do this, the InvokeForReason activity exposes a enumeration parameter which can have one or more of the following value indicating which build type should execute the sequence:

The last sequence, SharedResourceScope, can be use to execute some activities using synchronization based on a resource. This is like using a lock in csharp to synchronize access to a resource.

The next category of activities we can find are activities to manage Workspaces:

Those activities provides about all we need but we can regret the absence on an activity to create a workspace which is independant of the current build. (The CreateWorkspace activity is internally coupled to a build execution to gets the build definition).

You can find activities to manage labels:

There are some activities for FileSystem management:

For working with files, we only have activities for search and download from the source server:

We miss some activities for basic file management like copy, move, create or delete.

Most of the other activities are for build management and build information:

Since tests have become first class citizens in TFS 2010 and VS 2010 we have some activities related to them:

Small new feature in TeamBuild 2010, the management of source indexing (updating symbol files to add path to sources in TFS) and symbol server:

With those two activities, no more need for the Windows Debugging Tools and some nasty customization of your build projects

The last activities are for logging:

The new engine based on Workflow Foundation 4.0 is really good and Microsoft provided a lot of activities but i’m a little disappointed that they only shipped those activities necessaries for their own build templates and that some activities are too tightly coupled to a build environment. But i’ll still say to Microsoft: “Good job, TeamBuild 2010 is really great !”